Mass it up in April, when Critical Mass will be turning 20 years old!

Critical Mass in April will be held on FRIDAY the 25TH. You can even celebrate early at the Mass on March the 28th!

Critical Mass is a mass bicycle ride that takes place on the last Friday of each month in cities around the world. Everyone is invited! And no one is in charge!

CM originated in 1992 in San Francisco and is now held in over 300 cities around the world (2003 figure, now likely much more). 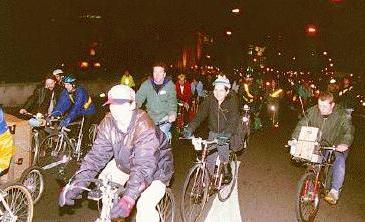 We're a D-I-T [Do-it-together], volunteer-run bike space in South London. We carry cheap new and second-hand bike parts, and have a tool library for use on-site. Fix your bike with us! View all posts by 56abikespace